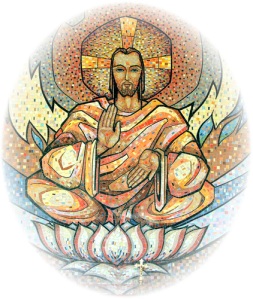 The world has known many saints and prophets and as the central figure of Christianity, Jesus Christ is one of the most popular personalities. Who doesn’t know the story of his birth, persecution, death and subsequent resurrection? However, there is a relationship to ancient Tantra to his story, as well. Do you wonder at this? Read on…

From the age of 13 to 29 years, Jesus’ life is mostly unaccounted for by Christian history. There are, in fact, elements of a resurrection or ‘rebirth’ even to this part of his life. Allow a Tantra teacher to explain the message of this obscure fact to you.

The scriptures of Tantra list Jesus as one of the 84000 avatars of the Almighty. An avatar, in Sanskrit, means a divine being sent down to pursue a certain spiritual mission.

Jesus Christ, in fact, belonged to this hierarchy of saints and prophets, sent down by the Almighty to chalk out a specific path of spirituality for the people of the pre-Biblical period ruled by King Herod. He had to chalk this path out from the vast eternal knowledge, also known as the ‘Sanatana Dharma’ in the Tantric Scriptures.

The three wise kings of Bethlehem, or the Magi, knew of his coming, and followed the bright star to the stable where the Virgin Mary gave birth to Jesus. The scriptures of Tantra, however, have a different take on their journey; they tell us that it was the full moon that led the three wise kings to their destination.

According to Tantra, a divine being or a messenger of God always chooses to ‘descend’ on earth at the time of a full moon – an auspicious time for all divine beginnings. Thus the full moon is always a signal to those who know how to read the signs, like the Magi.

Christ’s spiritual awakening began during his childhood, when his purpose on earth dawned on him. He had visions of a land awaiting him … a land that held the promise of vast eternal knowledge or ‘sanatana dharma’ for him. These led him on a long and arduous journey that ended in the land of ‘sanatana dharma’ or India – the birthplace and stronghold of ancient Tantra.

For sixteen years, he lived and studied in India under the tutelage of various teachers who were ready and waiting for him, just as his visions had foretold. It was from them that he learnt all the streams of philosophy and wisdom that would be required for the success of his earthly mission.

Of everything that he learnt, there were a few things that are particularly noteworthy. He learnt a sacred Tantra kriya that enabled him to project his life-force or ‘prana’ onto an inanimate object, an ancient tantra skill that he utilized at his crucifixion to eliminate all consciousness of bodily pain even as his soul lived on. This Tantra kriya is called ‘Kaya Pravesham’ or Projection of Life-Energy onto an Object.

After crucifixion, when his body was left in a cave and found to have disappeared on the third day, even his persecutors had to admit that he was no ordinary being. His resurrection, in fact, is further proof that he had mastered this tantra kriya completely.

The Vedas talk about him as Ishu which became, by popular spelling, Jishu and subsequently Jesus to the world. ‘Ish’ means the Almighty; add ‘u’ to that and the word immediately signifies one who is a part of Him.

It is a known fact among Tantra masters that Jesus Christ spent a large portion of his life in India -at a divine place called Jagannatha Dhama, meaning The House of God. It is God Almighty’s abode on Earth, according to the Vedic scriptures. Jesus, too, believed it to be the earthly abode of his Father in Heaven. This was the very place that taught him the intricacies of Hinduism and all the allied branches of religious and spiritual wisdom.

Interestingly, during this period, he also visited another divine place called Banaras (Varanasi) for advanced learning of some aspects of philosophy and spiritual logic. During that period not a soul – not his father nor his mother – knew where he was… a prerequisite for all saints-in-the-making so that spiritual missions are not disrupted.

Tantra scriptures give an account of Christ’s journey to India and his studies there. Jesus Christ came to India and was instructed to preach Christianity derived from the Eternal Truth or ‘Sanatana Dharma’ from which all religions evolve.

Christianity is what the people of that time period needed, for they belonged to a certain category of spiritual consciousness. They needed something to give them respite from King Herod’s dictatorial reign. Christian spirituality restored their faith in the Divine and helped them fight the repressive and destructive forces of King Herod.

Yet, all that we know of Christ has come to us from the Church. This particular phase of his life (from the age of 13 to 29 years) may be unaccounted for by Christian institutions, but the scriptures of Tantra provide us with richly detailed accounts of it. The earthly lives of the Messengers of God hold many a wondrous secret and a treasure trove of wisdom, but to understand them one must go to the right people.

Transmutation is a transformation of energies, and specifically this refers to the transformation of the sexual energy. The base sexual energy exists within the hormonal secretions of the endocrine system, as well within sperm and semen.  In esotericism, semen refers to the sexual secretions of both man and woman, and is also referred to as the Ens Seminis. This Ens Seminis can be transformed into an extremely vivifying energy that is literally the cornerstone of the great work of self-realization. All the effects of sexual transmutation culminate into a type of spiritual stimulation that can produce true, fundamental, psychological change.

Samael Aun Weor often speaks of psychological revolutions. A revolution only occurs by destroying the decaying norms of the past while simultaneously forming a new creation. In Hinduism, the divine couple of Shiva-Shakti is the creator-destroyer, and they are often posed in tantric union. Likewise, only the sexual energy can create and destroy, and this is related not just with the physical, but as well with the psychological.

In its essence, the key of self change lies within the transmutation of creative energy, because only it can create a spiritual nature within. Unfortunately, many devout aspirants are unaware of this tremendous reality, and thus it is inevitable that those who do not practice some form sexual transmutation will find themselves stagnant and unable to overcome their own personal vices and defects. Testaments to this fact are all the lamentable stories related to celibates in schools of Buddhism, Hinduism, Christianity, etc., etc., that do not know how to control their own sexual energy (the Holy Spirit), and thus they either suffer endlessly from wet dreams, take up the vice of masturbation, or worse, sexually abuse others. These problems can only be resolved through the science of sexual transmutation.

Any devoutly spiritual act is fueled through transmutation, thus meditation, mantra, prayer, etc., are complements of the transmutation of sexual energy. Nevertheless, it is necessary for single persons to employ the practice of specific Pranayama exercises in order to take advantage of the otherwise latent sexual energy. Those who are married should perform sexual magic, as this is the definitive method of sexual transmutation.

Exploration of the Sacred & Conscious, including Sexuality

Exploration of the Sacred & Conscious, including Sexuality